BOO! Today I’m reminded NOT to be fearful. Don’t allow media, politicians (or even movie directors) to exploit the primitive areas of our brains to scare us senseless.

Sometimes fear can be good, (lion, run!), sometimes a scary movie can make you heave a sigh of relief when you walk out of a dark theater and see the sunshine and say “phew, glad that ‘s not my life”! 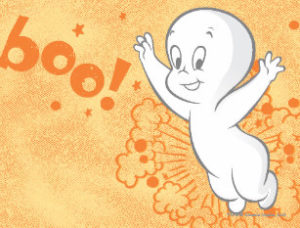 We don’t need to be fearful of immigrants, brown people, gender-variance, differently abled, or even witches and warlocks. Fear allows us to separate ourselves from the other! Fear of the unknown keeps us static. Move on!

In the US: White people regularly call the police on black people who are doing nothing wrong not only because of misplaced fear, but as a method of regulating access to shared space.

Here are some things people feared in the past and science (and common sense), ultimately prevailed! I’m sure there are more examples.

Trains. People feared trains in 1825 because they feared the human body surely wasn’t made to travel at incredible speeds of 30 mph. They thought your body would melt.
Phones. Elderly people feared that touching them would give electrical shocks. Men worried their wives would wast too much time gossiping. Preachers in Sweden said the phone was the instrument of the devil and phone lines were stolen or destroyed.
Radio. In 1936, music magazine Gramophone lamented the arrival of radio for many of the same reasons that reading and writing were attacked. Ironically, the magazine didn’t like radio because it diminished those two activities, which by the 20th century were seen not as scourges of society, but rather as generally good things to do.
Television – Some feared they would ruin your eyes, or they emitted dangerous x-rays.
Y2K bug – in the run-up to 200 we though airplanes would all out of the sky or that all data would be lost.
Cloning – in 1997 a scientist promised to clone the first human. There’s still only one of him.
Home taping – It was gonna kill music in the 80s. There is still music.
Robots – OK robots are scary.

This site uses Akismet to reduce spam. Learn how your comment data is processed.