When Jenifer Convertible’s drummer Andy Moore moved to Maine with his family, we recruited Eddie Siino to play drums with the group. We had already released two 7” singles (six songs) and had a bunch of originals and covers we were playing out around the LES.

Eddie had an encyclopedic knowledge of music and a natural and powerful feel for playing drums and crafting arrangements — and he could sing. What I didn’t know until much later, was that he was also a terrific and prolific songwriter. His band Cryptic Soup has a bunch of music up on Bandcamp, and you can hear influences from The Beatles, Beach Boys and many others, but overall it’s a wild and wonderful  diverse bunch of songs and sounds. 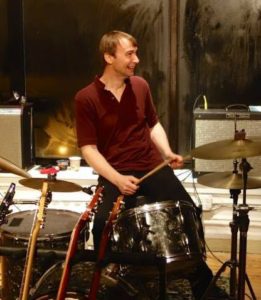 Eddie penned the best Jenifer Convertible songs including the opener from Wanna Drag “Overload”, and “I Made a Mistake” on the unreleased Fumes.

Jenifer Convertible rehearsed religiously twice a week (Tuesdays and Thursdays). We became really tight, and had a lot of fun together as a band. We played shitty gigs, and great gigs including a trip to Wilmington, NC for WE Fest, and a trip to Toronto for NXNW. In Toronto, Eddie was geeked out knowing one of his favorite drummers Hugo Burnham (Gang of Four) was in the audience!
No one can underestimate the level of bonding that goes on between band members after years and years of crafting music together.

We recorded an album with Wharton Tiers (Wanna Drag) and an unreleased EP (Fumes) at Excello Studios in Brooklyn.

Through it all, Eddie was affable, professional, funny, kind and generous with his talents. I loved him.

After struggling for years with health issues, Eddie died last week. I had hoped to play with him again at some point when I returned to NYC and am sad it never happened. I will miss him and his passion for creating music.

Please listen in if you can!

Here’s a couple of live videos where you can see Eddie playing with power and passion!