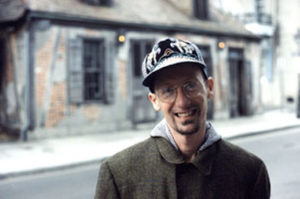 “Chuck Crosby was a self-taught outsider artist born in New Orleans, Louisiana May 21, 1957. He had created compulsively since he was a child and became depressed when a severe nerve injury left his painting arm useless. After much practice he got the other arm to take over and thus regained his ability to paint and draw. Crosby discovered he had AIDS in the early 1980s and started painting constantly, except during periods when he was too sick. He painted from his imagination and from life experiences. His style was unique and included repetitive images inspired by his dreams and fears. Some of the human subjects in his paintings were friends of his, including the frequently portrayed “Big Lady” and “Little Man.” He painted on any surface available – furniture, bottle, gourds, and canvas—with acrylics. At times the artist wrote a framing narrative of words along the borders of his paintings. Chuck had been looking forward to the exhibition of his work at the Arthur Roger Gallery in New Orleans but died before he could see it, at age 37 on July 15, 1994. A few pieces of work are available from Marcia Weber/Art Objects in Montgomery, Alabama.”

From Self-Taught, Outsider and Folk Art: A guide to American Artists, by Betty-Carol Sellen

This site uses Akismet to reduce spam. Learn how your comment data is processed.